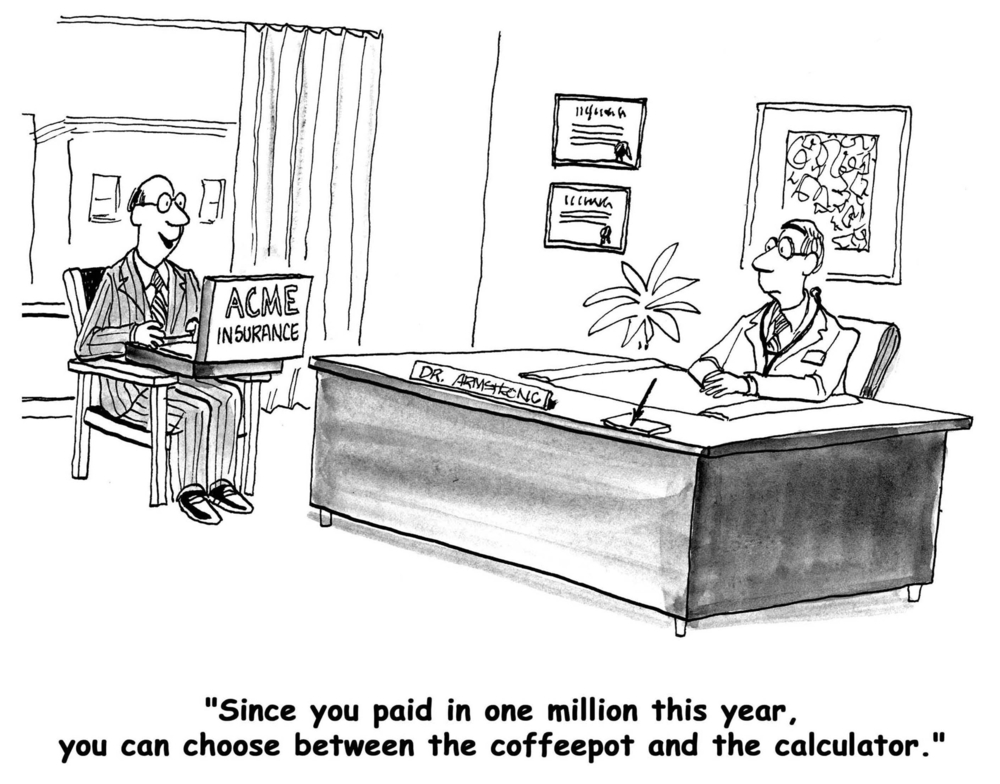 Medical malpractice premium rates in the United States vary significantly by medical practice and geographic location.  For example, the premium rate for a neurosurgeon in Long Island, New York is $331,295 (yes, over $300,000 a year), while the rate for an allergist in Rochester, New York is $1,905 (Source: Medical Liability Mutual Insurance Company.  “Physician-What’s My Premium?” Web. 8. Feb. 2014).  Standard rates typically reflect what are called occurrence policies that provide liability coverage for services rendered during a policy period, regardless of when the claim is reported.  The typical limits of liability are $1-1.3 million for damages sustained by a single patient and $3-3.9 million for an entire policy year.

According to a study in September 2010 by Mello et al, more than $8 of every $10—45.6 billion dollars—spent on medical malpractice liability costs in the United States was attributed to defensive medicine by providers who order tests and procedures that they felt were necessary simply to protect themselves from malpractice suits.  Physicians continue to order expensive imaging and lab tests to substantiate their clinical decisions as attorneys consistently refer to “failure to order tests” in court when deeming physicians negligent (Source: Mello, MM et al. “National Costs of the Medical Liability System.” Health Affairs, Vol. 29, No. 9, September 2010, pages 1-2).   These “defensive healthcare costs” increase as the number of malpractice lawsuits rise or the amount of payouts for frivolous lawsuits increases.

The following data below reflects a sampling of the wide disparity of medical malpractice rates according to medical specialty and various locations (Source: Medical Liability Monitor. “Annual Rate Survey Issue.” Vol. 37, No. 10, October 2013).

Texas: Moderate Malpractice Premiums.  In Texas, since the state enacted a $250,000 cap on noneconomic damages in 2003, claims and lawsuits in most counties have fallen by half, malpractice premiums have decreased on average by 27.6%, and physicians are moving into the state instead of moving out, according to the Texas Medical Association.

“Patients in Texas’ rural and underserved areas also are enjoying benefits of reform,” Goodman says. “Twenty-two rural Texas counties have added at least one obstetrician, including 10 counties that previously had none. The number of obstetricians practicing in rural Texas has grown by 27 percent.”

California: Moderate Malpractice Premiums (Outside the Cities).  In California, the state has also enacted a cap of $250,000 on non-economic damages.   California’s malpractice premiums, in numerous counties, are considered moderate.

California trial lawyers were able to get a new initiative to raise the cap on non-economic damages to upwards of $1 million on the Calfornia November 4, 2014 ballot—A California Increase in Cap on Medical Malpractice Lawsuits Initiative.  “MICRA”, The Medical Injury Compensation Reform Act, in California, currently protects patients involved in medical liability lawsuits by allowing unlimited economic compensation for any and all economic or out-of-pocket costs, including past and future lost income and earning capacity, all necessary medical care, as well as unlimited punitive damages. Under MICRA, patients can receive up to $250,000 for non-economic pain and suffering damages. This allows legitimate medical liability cases to move forward while discouraging lawyers from filing frivolous suits.   A recent study found that just doubling MICRA’s cap to $500,000 could cost consumers and taxpayers in California $9.5 billion a year in higher health care costs   Accordingly, California physicians will see their malpractice premiums skyrocket if this initiative passes (Source: William G. Hamm, PhD, et al.  “MICRA and Access to Healthcare”  Berkeley Research Group 2008).

Nebraska:  Affordable Malpractice Premiums.  Nebraska’s damages cap is pretty unique among states. That’s because most states place a cap only on one category of medical malpractice damages: non-economic damages, which includes compensation for things like anxiety, emotional distress, and other subjective harm caused by the malpractice.

But according to Nebraska Revised Statutes section 44-2825, the state has placed a $1.75 million total cap on damages in medical malpractice cases. This includes the plaintiff’s economic damages — meaning payment for past and future medical care and lost income — as well as non-economic harm.

Healthcare providers who qualify under the state’s Hospital-Medical Liability Act will not pay more than $500,000 in total damages, and any amount above that $500,000 is paid out from the state’s Excess Liability Fund (up to the $1.75 million overall cap, of course).  Accordingly, physicians’ malpractice premiums in Nebraska are some of the lowest in the nation.

Florida: Extremely High Malpractice Premiums.  Florida limits noneconomic damages to $500,000 per physician, which is twice as high as the caps in Texas and California, for example.  The Florida law allows for a cap increase in payouts to $1 million in cases of death, permanent vegetative state, injury such as blindness or limb amputation, or when the court finds that a “manifest injustice” would otherwise occur.   In Florida, a number of exceptions apply to the cap and malpractice premiums in Florida are among the highest in the nation.  For example, the court might increase the cap (or do away with it altogether) if a specific case merits doing so.

Skyrocketing liability insurance premiums are forcing hard-pressed OB/GYNs to abandon practices across New York State. A 2009 survey by the Center for Health Workforce Studies at Albany State University of New York found that 19 of New York’s 62 counties had no practicing OB/GYNs. The 19 rural counties, scattered throughout the state, had a combined population of nearly 875,000 in 2009, according to the U.S. Census Bureau.

Unfortunately, U.S. physician reimbursements for numerous high risk procedures have not increased in step with inflation.  In many cases, medical reimbursements for procedures and tests have dropped dramatically.  New rules and regulations imposed by the government–including the mandates for practices to employ Electronic Medical Records (EMRs)–are imposing significantly higher expenses for physicians and medical groups.  By quadrupling non-economic (subjective loss) malpractice payouts—as the new 2014 California ballot initiative strives to achieve—there will be dramatic increases in lawsuits and financial demands by plaintiffs.  This will lead to much higher malpractice premiums for doctors in California and, ultimately, to major problems for patients in terms of rising healthcare costs and limiting access to healthcare.  Physicians will be forced to practice even more costly defensive medicine, leave the state, avoid performing higher risk procedures, avoid treating high risk or litigious patients, or close their practices due to financial limitations.